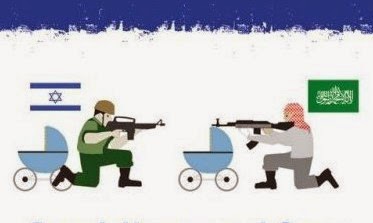 I like to write about Israel. They are our number one ally. They face the same threat of Radical Muslims as we do, although to a far greater extent than we do. As they try to create peace through strength, they are often criticized, much like George Bush was criticized when he used force against Iraq for harboring and supporting Muslim terrorists.

So Benjamin Netanyahu wins an election in a landslide. Here we are months later and Obama has yet to congratulate him. Instead, he went to the United Nations to undermine our ally, Israel, in favor of our enemies, Iran, Hamas, and Hezbollah.

Because Netanyahu has promised not to allow a Palestinian State while he is in office, Obama has threatened to go to the United Nations Security Council to pass a resolution recognizing a Palestinian State. He is going to block the Israeli vote opposed to a two state solution.

Why? The only reason I can think of is that Obama, as do many liberals, believes that a Palestinian state is the only road to peace in the Middle East.

In the past the White House has worked with Israel to block such a resolution from passing.

Why? Mainly because past U.S. leaders understood that a Palestinian State would basically mean the end of Israel.

Why? Because the Iranian Caliphate was built on the notion of completely wiping out Israel. Likewise, both Hamas and Hezbollah are terrorist organizations with charters calling for the complete anihalation of Israel.

In the past, U.S. policy has been to work with Israel, our biggest ally in the world, and the only strong democracy in the Middle East. Yet Obama is planning to completely change course in such a way that would completely undermine our ally and promote Iran, Hamas and Hezbollah.

This is a fact that too many people fail to realize, even we hear the voices of radical Muslims all the time saying this stuff.  The leaders of Iran say quite often that they will settle at nothing less than a complete annihilation of Israel; meaning they will settle for nothing short of a one state solution.

The Camp David Accords are another perfect example of this. Jimmy Carter had brokered a deal with the Palestinians giving them everything they wanted from Israel, and their leader at the time, Yasser Arafat, refused to sign it.

Why? He did not want a two-state solution: he wanted a one-state solution. He wanted Muslims to live side by side with their brethren in Palestine. The only means to this end is the complete Anihalation of Israel, and the death of all Jews.  The Palestinians don't want part of the land, they don't want to share the land, they want all the land.

So the reason Netanyahu refuses to sign any treaty that would create a Palestinian State is because he does not want to sign a treaty that would result in the destruction of his own nation. The only way that happens if there is a war and Israel loses.

The only other way to peace in the region is an all out war that Israel wins.

Oh, wait, Israel did win an all out war with all the surrounding Muslim nations in 1967. How many people learned about that in history class.  Israel was outnumbered, out equipped, and it looked like it was going to be destroyed.  Israel took quite a few casualties at first, but it drove the Muslim armies out of Israel, and it won the war.

This is how Israel got the West Bank and the Gaza strip.  They are not occupiers, they won this land in a war they didn't even want to fight. But many nations refused to see this truth, and continued to call the Israelites occupiers and the Palestinians victims.

But this victory was not recognized by the United Nations. Israel may have been the only nation in the history of the world (besides the Americans, who defeated the Indians) to have won a war and yet were treated as the losers.