Must the GOP cave on social issues to win in 2016? 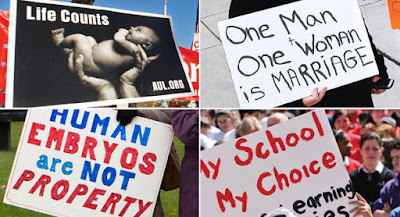 So we talk about a variety of things, and the conversation, as it often does, segues into politics.  One of the nurses starts to talk about how she is tired of conservatives pushing their social agenda on the rest of us.  She said, "She is just sick of it."

So I say nothing: I listen.  The conversation goes on to the modern world and the Internet.  The liberal nurse says, "Our parents and grandparents have old fashioned social views because they lived in a bubble; they didn't have access to all the information we do.  If they had access to what we do, they wouldn't be so old fashioned."

"Oh, yeah!" I wanted to say, "I can disprove your theory right here.  I have access to all the same information you do, and it only strengthens my religious believes; my social views.

"What do you mean," my liberal friend would have said.

I would have replied, "Conservatives want to conserve culture.  We want marriage to stay in the traditional sense of marriage.  We want to make Detroit better by encouraging men and women to not have premarital sex, and to get married before having children.  Then black children will enjoy the same benefits as the rest of society.  Statistics show that children born of a mother and father are 80% more likely to be productive members of society; they are 80% less likely to end up in prisons, and so on and so forth.  The studies are overwhelming in this regard."

"So these black kids don't grow up with the same advantages as kids born to a mother and a father.  They end up in poverty, and they end up in jails.  However, as a society, we enable impoverished blacks by giving them foodstamps and welfare and trapping them in their own poverty.  They cannot get out.  They are trapped.  It's a never ending cycle.

"Instead of encouraging marriage and tradition on the poor black communities, we enable them by saying it's okay to have sex before marriage, and it's okay to have kids out of wedlock.  So they never break out of the system.  They never get better.  So call black cities like Detroit go bankrupt."

Of course if I say this the liberal will get mad at me and the conversation would be over.  I would be called radical or old fashioned.  I would be called insensitive to poor black people, even though my actions would give them a better chance of improving their lot in life than anything a liberal would propose.

A similar discussion was started on the blogosphere when Business Insider published a post on June 13, 2015, by Linette Lopez, "Wall Street is getting tired of funding socially conservative Republicans running for president."  The article begins:


"For years, when it came to presidential candidates, Wall Street made huge compromises in order to support the Republican Party. The money men in New York City set aside their socially liberal views in order to support fiscally conservative candidates because that was the only way to get on the same page as the GOP base. The result has been a series of candidates Wall Street's big donors didn't really want.

"It seems those donors are getting tired of that outcome. Hedge fund billionaire Leon Cooperman recently vented his frustration with this arrangement on an episode of Wall Street Week. 'I tend to be more Republican in my views, but socially very liberal. I'm going to have trouble with any Republican that does not disavow a fixation with social issues,' he said."

The truth is that republicans must not cave on social issues.  They must continue to convince kids to hold on to traditional principles that are proven to work, as opposed to going with the consensus opinion of the times because that's the best way to avoid controversy.

Many of us on both sides of the aisle would agree that our culture is rotting.  It's not rotting where traditional views are held on to; it's rotting where liberal social views have grown roots.

Posted by John Bottrell at 8:14 AM