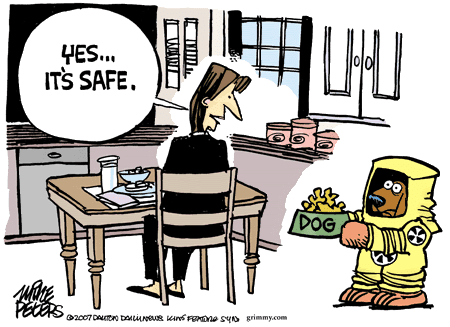 As a person who has studied the history of medicine, I have seen over and over again throughout the history of mankind that people tend to overreact to theories. They forget that theories are just ideas that have yet to be proven true or false.

Look at global warming as a good example. You have people who are scared to death that the world is going to be destroyed if we don't do something to stop it, and yet there has been no increase in global temperatures since 1998. And yet they don't care, they continue to be scared, to champion for more regulations that harm economies.  No wonder kids these days are depressed. The so called experts like to blame it on stuff like iphones, but the real reason is probably that kids are taught to be scared based on "theories."

There once was a theory that asthma was all in your head. All the focus of physicians was aimed at finding medicine to soothe the mind, rather than soothe the bronchial muscles that spasm during an asthma attack. It was for this reason that asthmatics had to wait until the 1950s to get medicine that actually worked. You see, sometimes the most well intentioned theories are wrong.

Another good example is the NFL. Joesph Maroon was the first to discuss a study of the brain that produces Chronic Traumatic Encephalopathy (CTE), a brain disease caused by swelling of the brain due to violent head injuries, such as those produced by violent hitting during football.


This "theory" has yet to be proven, however. This was just the result of one study. Many initial studies have later been proven false.

Another good example here is the hypoxic drive theory. Many COPD patients, for years, have been denied the oxygen they need based on a silly theory. While the theory may prove interesting in theory, real life experience has never corroborated it. Nearly all studies since its inception have proven it false. Yet out of fear of causing their patients to stop breathing, many physicians to this day continue to under oxygenate their patients based on this myth.

So based on one study, Chris Borland, a star defensive player for the San Fransisco 49ers, has decided to quit his million dollar job after only playing one season. He is turning down all sorts of fame and money based on a theory that has never been proven.

Years ago scientists came up with this theory that all cholesterol was bad for you. They believed that all foods high in cholesterol caused heart disease. So, based on this theory, you had many people afraid to eat foods that tasted good.

According to the Washington Post, there is now new scientific evidence that "eating foods high in cholesterol may not significantly affect the level of cholesterol in the blood or increase the risk of heart disease." The findings are so significant that the U.S. Government is "poised to withdraw longstanding warnings about cholesterol."

According to National Review, March 9, 2015: "Few areas of science have seen greater advances in recent decades than medicine, but the cholesterol story shows that when dealing with highly complex systems, even the best-informed scientists, using the best available data with the best of intentions, can draw conclusions that turn out to be incorrect. Science deserves all the love we can give it, but that love should not be blind.

My point here is that people need to quit overreacting. Surely we should respect theories, but we must stop treating them as facts. And the last thing we should do is write laws that are nearly impossible to get rid of based on fear caused theories.

Posted by John Bottrell at 4:48 AM