Trump Tax Cuts Will Not Add $1.5 Trillion To National Debt

I don't want to delve too deep into this subject. But, I'd like to make a few notes about the Donald Trump Tax Cuts. I just want to say that it offers everything nearly every conservative champions for. And they are revenue neutral. All this talk about it costing trillions of dollars is poppycock. 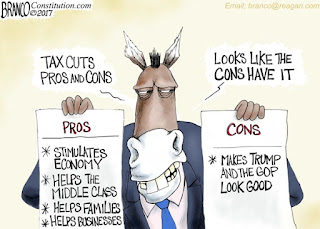 Look at it this way. The CBO estimates the cost of nearly all prospective bills. Their job is to estimate how much it will cost. Please note that they make their predictions based on how the economy is rolling right now. Okay?

They assume things will not change. So, based on how the economy is right at this moment, they estimate the bill will add $1.5 trillion to the national dept.

But it won't. They never do. Tax cuts never result in loss of revenue as liberals say they will. In fact, as we reported on on this blog here, tax cuts increase government revenue. They do this because there is always an unexpected economic boom that follows them. It's always unexpected, at least according to the liberal press. It's always unexpected.

And because of this boom, revenue coming in increased each time over the ensuing ten years. Ten years after the Kennedy tax cuts government revenue nearly doubled.

So, all this bologna about increasing debt is just that: bologna. It's poppycock. It's a bunch of liberal crap to spin the tax cut in a negative way. It's an effort to dampen public opinion of it. That's all. It is simply not true.

I don't think I need to explain why it happens again in this post. I have covered that in many other posts on this blog. But, I will say here that tax cuts increase wealth, it increases government revenue. It does not increase debt. It does not cost money. It is revenue neutral.